The weather was amazing. Mostly sunny days with highs in the 70’s. This is definitely not the kind of weather Ireland is known for. The Emerald Isle stays green from all the rain they get.

I had been watching the weather reports and packed a sweatshirt, jacket and most importantly, an umbrella. In the two weeks we were there I never used any of these things. It did rain a few times but only when we were driving or already at our hotels for the evening.

Fortunately I pack a couple pairs of shorts “just in case”. Who’d of thunk I’d get a sunburn in Ireland. It was fun looking at all the locals enjoying the sun as well. I suspect aloe gel was sold out in the stores.

We started with a few days in Dublin and then headed to the countryside.

The day before we left for Kinsale I received an email from the tour company that our hotel in Kinsale was changed to Cork and our Dingle hotel moved to Killarney. Apparently the group ahead of us got food poisoning in Kinsale with some going to the hospital. Yikes! Projectile vom…never-mind…was not what I came to Ireland for. Both of the original hotels were owned by the same company so they changed both out of an abundance of caution.

We saw all the same things and honestly the new hotels were fantastic. CIE did a great job with this. Our Killarney hotel was in the city center and a perfect location.

During our day on the Dingle peninsula we drove by a set for Star Wars VIII where they had been filming the week before. Scenes from several of the recent films were shot in southwestern Ireland.

Our tour started with 23 people, but 10 were on a shorter itinerary. After 6 nights we were down to 13 travelers on our 54 passenger bus. Plenty of room to spread out. The bus was great and was equipped with wifi and had power outlets in each row. Who could ask for more?

The Cliffs of Moher was stunning in full sun. I recall wind, clouds and mist during my last visit around 2002. Visiting Derry/Londonderry (depending on your religion) and Belfast was interesting, yet troubling. There is peace now, but the year of violence between Protestants and Catholics is hard to imagine.

While on an evening walk by our hotel in Belfast I saw a monument with a wonderful poem on it that spoke to my love of travel.

Down a wandering path
I have travelled,
Where the setting sun
Lies upon the ground.
The tracks are hard and dry
Smothered with
The weather’s wear,
My mind did move
With them that had
Before me seen,
Trodding down the ground
A track for me to follow,
Leaving marks for others
A sign for them to follow.

I have since learned there are 1,000 of these Millennium cast iron mileposts created by four different artists and installed to mark the creation of the National Cycle Network. They are found along cycles routes through the UK.

On our second to last night we stayed at a 19th century castle hotel. What a beautiful place. Getting lost was part of the fun. To get from reception to the rooms you went upstairs, down a hall, upstairs, downstairs, around a corner and through a courtyard.

I certainly didn’t lose weight on this trip thanks to the great breakfasts with wonderful pastries. The included dinners did get a bit repetitious though. The iconic Scotch/Irish restaurant McDonalds along with a great pizza place did break things up a bit. Outside of McDonalds the Irish do need help with their burgers.

We had a wonderful adventure and I hope you enjoy my photos.

Our Tour Map – Jewels of Ireland 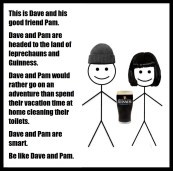 Me: Oh Cool, let me take a picture. Pam: Give me the Wet Wipes you son of a bitch! (Pam was not pleased) 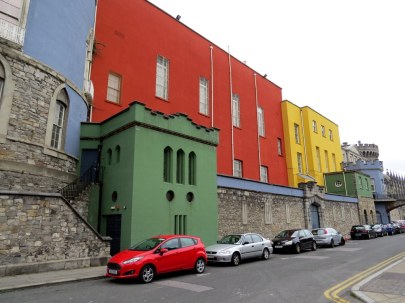 I’ve never seen so many knockers in one place before. Quite amazing.

The cat and the mouse that got stuck in the pipe organ and were mummified. Christ Church Cathedral

These markings saved my life.

Dublin. If you installed the bicycle app you could ride free for half and hour.

Samples at the Guinness Storehouse, Dublin

Waterford Crystal Factory. These helmet will be given to the coaches of Boston College and GA Tech when they play at the Aer Lingus College Football Classic in Dublin on Sept 3, 2016.

“The cry of the Mandrake is fatal to anyone who hears it.” ~Hermione Granger Thank goodness I had my earplugs handy.

They seem to drink a lot of Guinness here.

Stained glass mural at Blasket Centre. Learning about the people who used to live on Blasket Island was fascinating.

They were filming scenes for Episode VIII on the Dingle Peninsula last week. This is one of the sets…way in the distance. 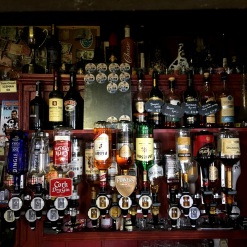 Be careful out there

Greeted at our Medieval Banquet dinner

Pubs are a religious experience

Kylemore Abbey. This was a quick photo stop through the bus window.

Random beauty along the road

Warning sign at the entrance to a cemetery. I took care not to get decapitated. 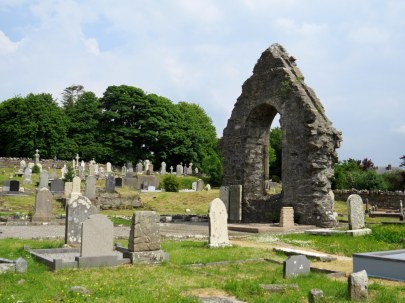 I’m pretty sure this is an Irish TARDIS between the diesel pump and mailbox.

Giant’s Causeway, an area of about 40,000 interlocking basalt columns 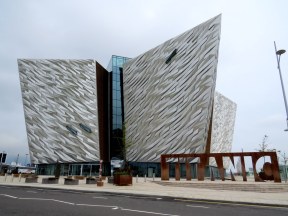 The flavors of Ireland. 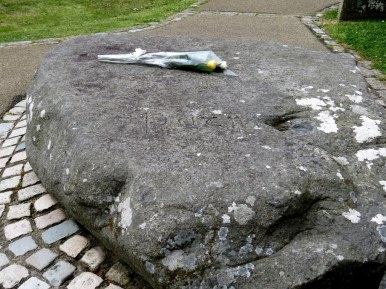 Woodhenge found at Knowth that would have pre-dated Stonehenge 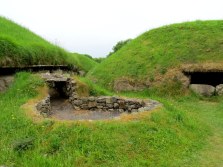 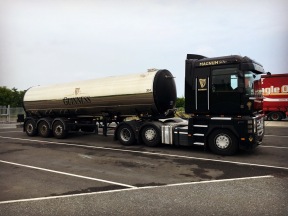 Wish this baby had a tap on the side. 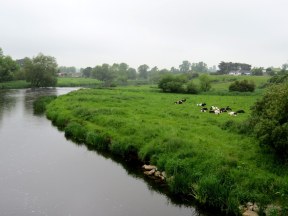 Second to last night in Ireland and we get stuck in this hell hole. Cabra Castle Hotel

Europeans are quite progressive.